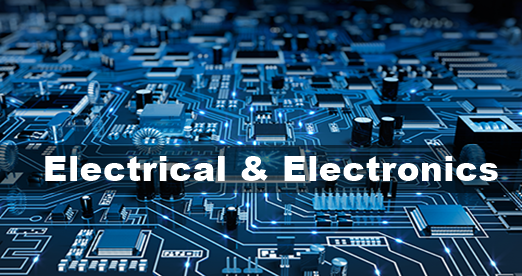 Electrical & Electronics Engineering is an innovative assimilation of Basic Core Branches of Electrical, Electronics, and Computer Engineering. In depth knowledge of principles of these interlinked fields allows an EN Engineer to levitate in diverse portfolios.

At VIT we cover following topics as per the guidelines of the University:
Electrical energy systems – encompass the study and design of electrical transmission systems, electrical machines and variable speed drives; high power electronic converters and high voltage engineering. This requires engineering on a grand scale, such as power distribution across Southern Africa. Power generation from renewable resources, such as wind and sun, and electrical transport, such as battery electrical vehicles, are of growing importance in the electrical engineering field and postgraduate studies.

Electronics – the study of components and circuits used to construct items such as audio amplifiers, radio transmitters and computer circuits. Students learn about elementary electrical components, transistors, integrated circuits, computer circuitry and power electronics. The field specialises in areas such as microwave electronics, superconducting electronics, ultra-high speed electronics and the prevention of electromagnetic interference between devices.

Electromagnetic systems – are diverse and complex, ranging from the study of the electromagnetic effects of motors and electrical insulators to radio and radar antennas, radio waves and visible light (fibre optics). The scope of study ranges from undergraduate introductory courses to world class research at graduate level.

Computer systems – students are trained to design and implement computers and digital electronic systems. This field also covers the design and construction of microcomputers built to control almost every electrical appliance, from automatic irrigation systems to autopilots for aircraft. Computer programming for embedded systems and reconfigurable logic circuits and the use and development of real time operating systems to address a variety of engineering problems, are also of key importance.

Control systems – range from the temperature control in air conditioning systems to the sophisticated automatic landing systems that allow aircraft to land autonomously in thick fog or to point camera systems accurately from satellites to target areas on the ground. Students learn techniques to design control systems for both electronic (analogue) and computer (digital) implementations and also to apply the knowledge in other branches of engineering.

Signal processing – Speech, radio waves and television images are all examples of signals. Students study the behaviour of these signals and apply computers usefully to process them (eg speech, speaker and image recognition, software defined radios and protocols). Mathematical aids are created to analyze and understand these signals. Postgraduate students are involved with leading edge research in speech processing, radar and sonar, image processing, software.

Labs: All Labs of EN are well equipped to gauge a curious mind. Lab work and problem solving form a vital part of the curriculum.

Let us not forget the rich heritage of our country and feel proud to be a part of this nation. #HappyRepublicDay2023! ... See MoreSee Less

"No real change in history has ever been achieved by discussions.”Warm wishes on the occasion of Subhash Chandra Bose Jayanti. The only way to celebrate this day is to promise to work towards creating a country Netaji always worked for. #happyparakramdiwas ... See MoreSee Less

A beautiful, bright and delightful day, the sun entered makar to intense the ray. The crop harvested to cheer the smiles, come together and enjoy life.” Wishing You A Very Happy Makar Sankranti#HappyMakarSankranti ... See MoreSee Less

May God brighten our lives like the fire of Lohri and shower it with happiness and prosperity. Best wishes for Lohri in 2023. Happy Lohri to everyone.#HappyLohri2023 ... See MoreSee Less

May you find success, happiness, and everything your heart desires. Wishing you and your loved ones a very Happy New year 2023!#HappyNewYear2023 ... See MoreSee Less