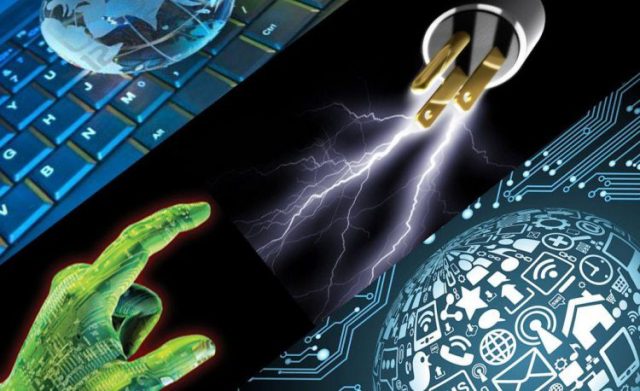 Emerging Technology is a term commonly used to describe a new technology, but can also refer to the continued development of existing technology; It may have a slightly different meaning when used in various fields such as media, business, science, or education.

Thanks to emerging technologies, ‘intelligent enterprises’ are re-establishing and strengthening the way they do business. Through the use of these tools, they are advancing their organizations in ways that not only meet their business goals, but also benefit citizens, communities and society.

A dynamical system is a system whose state evolves with time over a state space according to a fixed rule. In mathematical form it is a system in which a function describes the time dependence of a point in a geometrical space.

Examples include the mathematical models that describe the swinging of a clock pendulum, the flow of water in a pipe, and the number of fish each springtime in a lake. Scientists increasingly view Earth as a dynamic system – a combination of interrelated, interdependent or interacting parts forming a collective whole or entity. On a macro level, the Earth system maintains its existence and functions as a whole through the interactions of its parts, called components.

One of the enduring challenges of modern electrical engineering is to find an implementation of photovoltaic technology that is efficient, effective under varying operating conditions and highly resistant to damage while not being cost prohibitive.

Different engineering approaches have been used to raise collection and distribution efficiency, through perovskite-based cells, which have recently captured the most attention at major research facilities.

Once you collect energy, converting it for use in the electrical system is an essential next step.

A new power converter developer in the Department of Electrical Engineering at the University of Arkansas will now make it easier for users of renewable energy to shunt excess energy into the power grid. This has the potential to make rooftop solar initiatives much easier and to further incentivize homeowners to pursue energy efficient technology.

Wireless Power Transfer (WPT) makes it possible to supply power through an air gap, without the need for current-carrying wires.

WPT can provide power from an AC source to compatible batteries or devices without physical connectors or wires. It is extremely useful to power electrical devices where interconnecting wires are inconvenient, hazardous, or are not possible.

Use of Virtual Reality & Augmented Reality in Electrical Engineering

Virtual reality draws on multiple disciplines, but in terms of providing a sensory experience that maps effectively to ‘real-life,’ electrical engineering is crucial.

Augmented reality (AR) is a technology that superimposes a computer-generated image on a user’s view of the real world, via an electronic device such as a smartphone or tablet.New applications of AR have the potential to revolutionize how electrical systems are managed and maintained, by superimposing current data and virtual objects onto a cabinet, machine or plant, enabling instant issue diagnosis and contactless maintenance.

The idea of the ‘Personal Area Network’ has been around in computing science for a long time, but it’s only now becoming a practical reality. Devices now can operate on a smaller scale than

ever and interface seamlessly with the wider environment.Wearable devices have been developed to authenticate access to vehicles and machinery, improve reading comprehension while engaged in exercise, and provide communication information without the use of a phone. Wearables include devices like smart glasses, such as Google Glass, and smart jewelry, like Ringly. Similarly gadgets like Jawbone, FitBit & GoQii are also gaining lot of traction.

in e-readers, mobile phones and other consumer electronics.

Nanotechnology is said to have such pervasive consequences that the 21st century is already proclaimed to become the ‘nano-century’. Scientists and engineers across the globe are currently exploring the new characteristics that materials acquire at the nanoscale.

Whereas Nanotechnology has far reaching application in Medical Sciences, Food, Space Research and a number of other fields, it can also be a trend setter in Electronics. It may hold solution to increasing the capabilities of electronics devices while reducing their weight and power consumption.

An electric vehicle is a vehicle that uses one or more electric motors or traction motors for propulsion.

An electric vehicle may be powered through acollector system by electricity from off-vehicle sources, or may be self-contained with a battery, solar panels or an electric generator to convert fuel to electricity.

Also known as Space-Based Solar Power, or SBSP.  With ever increasing Energy requirements, the world need to find new sources of clean energy.

Artificial intelligence has provided great potential and space for the optimization of electrical engineering.

AI is already being extensively used in areas such as Expert Systems, Fuzzy logic control systems & in Artificial neural networks. Machine Learning & Deep Learning are also finding lot of use in technologies like Signal Processing, and safety and maintenance of Power Systems.

Application of Internet of Things in Electrical Engineering

IOT is finding lot of utilization in Electrical Engineering in areas such as:
Home and building automation

At Vision Institute of Technology, rigorous mentoring is done to ensure all Final Year Students prepare Projects which stand up to the Industry requirements. The Projects are application of intuitive thoughts, after considerable research, building over all a student learns in the college. ... See MoreSee Less

Agriculture Department of Vision Institute of Technology is extremely proud to have continuously given University Merit holder. Our AG branch has one of the finest placement records with huge number of students placed in leading public and private organizations. We also have number of startups from AG branch. ... See MoreSee Less

We at Vision Group of Institutions are extremely cautious to ensure all student undergo proper summer training, and also arrange frequent Industrial Visits to allow the student to assess the real-life implication of what they are learning. ... See MoreSee Less

At Vision Institute of Technology, we understand that today basic skills in emerging tech has become a basic requirement for most jobs. Students of VIT get an excellent opportunity to pursue Certification Courses while pursuing the regular programs and be a part of the technological revolution. ... See MoreSee Less

Yoga Day 2022 celebrations.At Vision Institute of Technology, sports is an important part of the curriculum. The campus is well equipped with multi-sporting facilities that include Cricket, Basketball, Volleyball, Badminton, football, Kabaddi, Athletics Field, and other indoor games. The college not only aims to improve a student’s physical abilities but also instill a sense of good sportsmanship in them. ... See MoreSee Less

At Vision Institute of Technology, we promote new technologies which will be the main job providers for the coming years. Mechanical Department is specially particular to encourage student adoption through frequent lectures, certification programs, and projects. Today it is more relevant than ever for all students of Mechanical to study, understand and work on various technologies related to Industry 4.0 & VIT is leader in the same! ... See MoreSee Less

In Future agriculture will use sophisticated technologies like robots, temperature and moisture sensors, aerial images, and GPS technology. These will allow farms to be more profitable, efficient, safe, and environmentally friendly.Our students at VIT are already working on these. Visit our labs to see the unfolding of the future. ... See MoreSee Less

A student industrial visit and on-site learning expedition was organized by Vision Institute of Technology, Aligarh on 16 June 2022 at National Centre for Medium Range Weather Forecasting (NCMRWF), a Centre of Excellence in Weather and Climate Modelling under the Ministry of Earth Sciences. The students were introduced to CRAY XC 40 HPC, a super computer, by Computing Facility head Dr B.Atiyaman (Scientist F) and Dr Abhijit Sarkar (Scientist F) The students got to see the working of the supercomputer, which is used for weather forecasting using the Numerical Weather Prediction model. The weather forecast is of national importance and vital to numerous people including farmers, relief workers, etc. The students were accompanied by HOD(CSE) Dr. Naveen Kr Singh, and other faculties. The entire session was a big learning experience for the students of Vision Institute of Technology. The mission of the NCMRWF is to continuously develop advanced numerical weather prediction systems, with increased reliability and accuracy over India and neighboring regions through research, development and demonstration of new and novel applications, maintaining the highest level of knowledge, skills and technical bases. ... See MoreSee Less

For a teacher the success of student is the most precious gift. We at Vision Group of Institutions are ecstatic to check the progress of our students. It also encourages us when they speak positively of initiative taken by us like Club Activities, numerous events and functions, and the entire culture of belongingness. ... See MoreSee Less

There is nothing more thrilling than to find our students attaining new heights in their professional life. Thrust on Academics, having a competitive environment and individual counselling and mentoring at at Vision Group of Institutions has been most beneficial for all our students. We wish them all the best for their future! ... See MoreSee Less