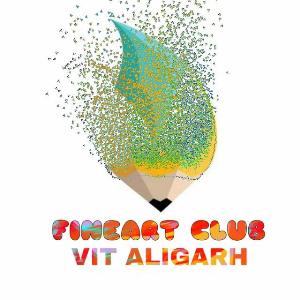 Fine arts club of Vision provides an opportunity to the students to let their imagination run wild and provides them with the sight to see things in a different way. Students learn from one another and share their prowess in different aspects of art.

“Fine Arts is the study & making of visual works of art. It can be in the form of dancing, paintings, photography, film, architecture, etc.”

It teaches and prepares students to become artists and to follow other practices that are associated with the making of art.

According to Aristotle “the main aim of art is to represent not the outward appearance of things, but also their inward significance”.

As per some writers, the idea of fine art was invented early modern period in the West. Larry Shiner in his book: “The Invention of Art: A Cultural History” finds the invention of fine arts in the 18th century.

Some of the events that were held under the fine arts club in recent past are:

An inter hostel rangoli competition organised on the prosperous day of Diwali saw students competing with each other. It was fun, frolic and a test of one’s creativity. It was a test of self-expression and it left the observers bewitched.

Take a couple of pencils, a piece of papers and mix imagination as per your limits. This is how you make a beautiful sketch and those who followed took away attractive prizes return for their sketches that will serve as memoirs of their stay here.

Craft is a type of art that typically refers to the assembly of handmade goods. This type of art has been around for centuries, and it typically involves making items that are not only attractive but useful as well. In many instances, crafts are generally made from raw natural materials

This Diwali it was the students’ turn to illuminate the institute which has been illuminating their minds over the last few years and they did it with finesse. In the end the result was there for everyone to see and get enraptured as the shimmering lights of diyas and candles illuminated the hostels on the holy night.

An event that saw students being blind folded and led by their partners to create images that followed the path laid by their imagination and guided to some extent by the initial image given to them. The results were hilarious in some but beyond imagination in few.

Who says a painter needs brush to unleash his imagination. All that was needed in this event were some water colors on one’s fingers and that’s how we crowned the Leonardo of finger painting.

Sculpture is three-dimensional art. Traditionally, there are two main methods: carving material such as wood or stone, and modeling forms by adding pieces of material such as clay. Modern artists have explored new materials and techniques.

A still life is a drawing or painting that focuses on still objects. The subject matter is inanimate and never moves, typically with a focus on household objects, flowers, or fruits. Still life work contrasts figure drawing which focuses on a live human model.

Join BBA or BCA at Vision Group of Institutions. Management Courses to bring out the best in you ... See MoreSee Less

A campus to shape your dreams! ... See MoreSee Less